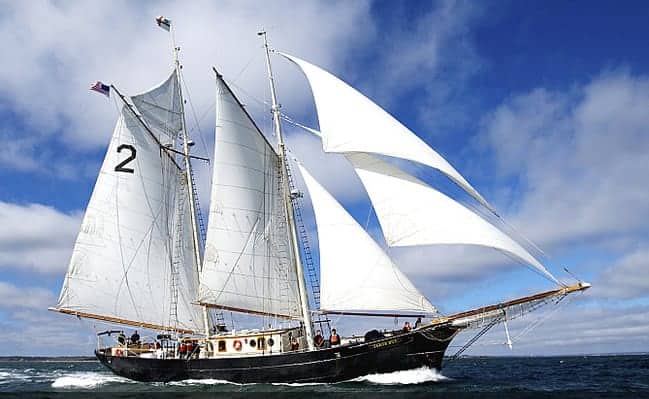 Peter Mello attributes his success in life to his high school years at Tabor Academy in Marion, Mass., a college-preparatory school where the Tabor Boy, a 92-foot sail-training schooner, is a seafaring classroom.

“Hardly a day goes by when I don’t think of the success I’ve had and attributed it to the time I spent aboard the ship,” Mello said by phone Friday while out for a walk near his home in Mattapoisett, Mass.

Mello is featured in a documentary called “Tabor Boy: 100 Years at Sea,” which premieres on R.I. PBS on Sunday at 9 p.m.  The film, by John Rice, shows the ship’s origins 100 years ago as a North Sea pilot schooner and follows it to its use in nautical and marine science education.

“It’s a beautiful documentary,” Mello said. “The ship is doing incredible things today,” such as science in the Caribbean. “The ship has incredible stories about how she has changed people’s lives.”

Mello served on the ship from 1973 to 1977. The ship starts as an afterschool activity, then becomes a weekend activity and a summer activity, he said. “Every day, we would go out and work on the ship,” which was close by because Tabor Academy is right beside Buzzard’s Bay.

The ship is run by students, with only one professional on board, the captain.  “On Friday nights, we would sail her, to places like Nantucket, Martha’s Vineyard, Woods Hole, Provincetown or Newport for the weekend,” Mello said.
During his summers on board, he said, the ship went to Maine and to Bermuda four times.

In 1976, as part of the Bicentennial celebration, he helped race in an international fleet of Tall Ships from Bermuda to Newport. “It was an amalgamation of young people from all over the world,” Mello said. “It was amazing.”

In his senior year, Mello was elected by his peers as the ship’s executive officer.  “It’s an incredible platform for developing leadership skills and life skills,” he said. “When you go to sea, you’re literally and figuratively in the same boat together.” Whatever happens, you have to figure out a real-life solution.