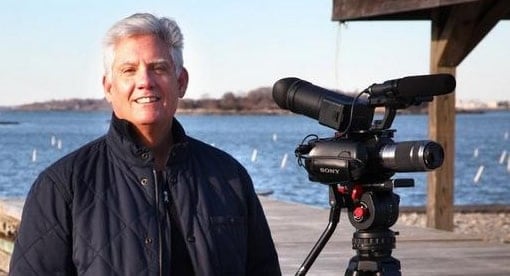 As an executive producer, director and writer, Rice believes a documentary is more than just an interesting storyline. For Rice, it’s all about using strategy and intuition to incorporate compelling themes and characters giving the audience a memorable takeaway.

“I’d rather be called a writer than a videographer,” he said. “If I don’t write the script, the documentary isn’t going to be any good. You have to write the script to make it work.”

The challenge in creating a documentary is being able to weave the ideas, visuals, sound bytes, images and narration together, he explained.

Rice grew up on the South Shore and studied radio and film at Emerson College. He started his career as a D.C. lobbyist for a documentary trade association and then worked as an executive producer for several Fortune 500 financial service companies in New York city. He later moved to Boston and worked at WCVB-TV’s Studio 5 production unit.

In 1997, Rice created Above the Line to write, produce and direct his own programming.  “I felt it was time for me to start making my own thing,” said Rice. “I knew I could handle a lot of programming because I had done it before. I wanted to be a small-business person, an entrepreneur.”

His documentary “Tabor Boy: 100 Years at Sea” is his latest labor of love. As a Tabor Academy alum, the film is an homage to the school’s 92-foot sail-training schooner. It portrays the history, personal connections and emotions people have with the Tabor Boy.

“The ship has been able to do a lot for thousands of kids, whether it’s teach them about leadership and responsibility or give them a love of the sea,” Rice said, recollecting his own experiences on the Tabor Boy. “All of these stories are told in the documentary.”

In addition to being a training vessel, the Tabor Boy sails to the Caribbean every third year. Students participate in coral reef research as part of the Caribbean studies program.

According to Rice, the business paradigm of shooting documentaries has changed over the years, making it easier for almost anyone to do it. But with more outlets for documentaries to exist, creating material that’s compelling, intelligent and entertaining is what distinguishes Above the Line, he said.